Good Old US of A

[This is a post from "Lone Vet," a tireless activist who posts regularly on Portland Indymedia. Original here.] 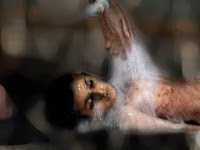 Dead Iraqi Child, tell her you are just too busy.

Suppose you had a country that invades other countries because they think they may be in some danger. This strong country just happens to be the biggest arms dealer in the world, the runner up not even close. This country has over 800 military bases, (maybe as many as 1000) around the world and 0 foreign bases on its territory. This is a rich country that got its start by slaughtering the inhabitants and taking control of the vast lands. This country tortures its prisoners, jails more citizens per capita than any other nation. This country will lock up those who cry for peace but honor those who lie, cheat and try to destroy all its freedoms. This country makes millionaires out of scoundrels and liars and the press is bought and paid for. The leaders say that we must go to war but stay back in their air conditioned halls of government and watch as millions of poor people are murdered or injured beyond belief. This country is not Germany of the 1930s or the U.S.S.R. of the 60s; not even Italy of the 20s; this is the United States of America of 2011. My country! I did not serve in the US Navy for this!

The people of the United States approved the "State of the Union" address by Obama a few weeks ago by a margin of 92% to 8%--I was stunned. These are just words that have already been forgotten, what the hell is the matter with our progressives in this country?

Gitmo is still open, DOD is considering pushing the withdrawal dates back in Iraq, we are still killing women and children in Afghanistan and now Pakistan. People are losing their homes at alarming rates, unemployment is at 9-26% depending on who you are and where you live. We are out of money in Oregon and will cut vital services to our schools and our most vulnerable citizens and say, "We just don't have the money."

The cost of our occupations and war for Portland is over 1.4 BILLION dollars, the cost for Oregon is over 9 BILLION dollars, yet not one politician has pointed this out during any budget discussions. We should have a counter in front of our City Hall telling people how much we are wasting supporting this corrupt empire; maybe people will begin to understand why we are going broke.

Peacemakers are being arrested or their files, computers and papers are being stolen by Obama's FBI and Portland is about to rejoin a taskforce that will be run by the FBI but cost us time and money.

Demonstrations against the occupations have seen their numbers fall as the Obama Administration has done a number on the unions, national peace groups, and progressives in name only. (PINO) We only protest on Saturdays and we do beg the authorities for permission by requesting a permit---what a sad bunch of weenies we have become. We challenge no one, we pressure no one, we are losing our republic and all we are worried about is who got nominated for some award in the movie industry. We must do more--92% approve of what Obama had to say indeed!

War is failure, occupation a disgrace!

"Funding these wars is killing our troops"
http://www.mfso.org/

* Why laughter?? Because without it I would have gone insane years ago.

Sen. ** harry reid must be replaced as Majority Leader, call me when you agree or just go away!

An ounce of practice is worth more than tons of preaching.
Mohandas Gandhi

Thoreau may have also brooded over the reaction of Emerson, who criticized the imprisonment as pointless. According to some accounts, Emerson visited Thoreau in jail and asked, "Henry, what are you doing in there?" Thoreau replied, "Waldo, the question is what are you doing out there?"
Posted by Jody Paulson at 1:37 PM

The cost of war page with its trade offs is a great tool. It should probably be used more in arguments against the war. Thanks for the reminder.

Yeah Jody....Take a picture of any dead kid and put it online and people will feel sorrow...Attach some bullshit lines about America being evil and that will make em hurt.....How about how we give more money to world aid then anyone else? How about the fact we have found twice the population of Eugene in mass graves in Iraq..You sound like another ignorant liberal who knows nothing about the world beyond your backyard....
Maybe you should go sit down with the victims of the Iraqi regime (the ones who lived) and talk to them about life under saddam..If the US is in a war, only a fool would imply the deaths created by the enemy are the responsibility of the US. 95% of the deaths in Iraq are at the hands of their fellow Muslims....Not the US. Have you ever been the Middle East or the Arab world? Ever been outside the US? Ive read you lies about 9/11 and now this crap.....Your extreme politics blind you from ever seeing the reality of this world...ignorance at its worst...

Hey, "truthman" ... why do you read my blog, anyway? I know you read Portland Indymedia, where the original article was posted by Joe Walsh in the first place ... what, are you "assigned" to me or something? Whenever I post anything there about 9/11 truth, you're always right there to waste your time challenging me to a "debate." Get your own damn blog if you want to defend the official story. Like it doesn't have a big enough megaphone as it is.

Twitter censors free speech. I haven't had time to switch to Gab yet, but you should. If you want to see my old stuff, check out @jodypaulson and @greentaralady.