Protests on Wall Street and in front of San Francisco FED 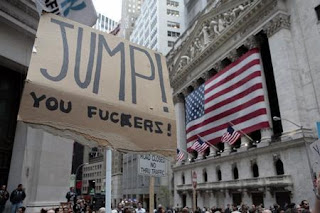 There was an emergency protest in front of Wall Street on Sept. 25 . Thanks to all who won't take this lying down. Why should we hand over a blank check to Goldman Sachs???


Cindy Sheehan has ongoing protests here in San Francisco -- video and more info at http://cindyforcongress.org/
Here are some alternative plans to the highway robbery congress voted down today --

Just last week, when word broke that Freddie Mac and Fannie Mae were in deep trouble, I advised everyone in the Cindy for Congress campaign office with extra money in their bank accounts to pull it out and buy gold. Here are headlines for today:

Want some more good advice? Stock up on food.

Prepare for the Collapse of the US Dollar

Posted by Jody Paulson at 5:22 PM No comments:

Let's get some boots on the ground for peace and truth!

I just got this in my email, and it struck a chord in me, because I'm currently working for a political campaign and while going door to door is a well-respected strategy for promoting political candidates, I never thought about it as a way to spread a message like peace (or 9-11 truth, for that matter):

On Saturday, September 20, with your help, 25,000 peace activists will talk with 1 million voters about what’s at stake in Iraq and how they can join the movement to end the war!

CODEPINK is partnering with United for Peace & Justice, True Majority, Win Without War and other organizations for a massive door knocking for peace. We'll bring our CODEPINK flair of costumes and singing.

Volunteer doorknockers will ask people to sign an antiwar petition directed to Congress. Our message: End this immoral war, bring our troops home, and invest in America's future. In addition, we will encourage people to join local anti-war groups, engage in voter education work, and become a part of the organized antiwar movement in their area.

for info email peace@globalexchange.org
Posted by Jody Paulson at 11:51 AM No comments:

Do you get the feeling we're being distracted ... *again*?

There's a genuine police state situation shaping up near the RNC. Dick Cheney is touring all the former Soviet satellite countries like the Ukraine, Georgia, and Azerbaijan. And all the press can talk about is Caribou Barbie and try to tamp down the fact her family is every bit as dysfunctional as most of the rest of our country (thanks in part to right-wing repressiveness about birth control).

Palin is such a weird, distracting choice for a running mate (except maybe to the evangelical far-right Christians) I'm a little worried the Republicans have written off the idea of even having an election. What if this whole thing is a distraction and "the Powers That Be" are banking on martial law between now and November?

There I go again. I've been on the edge of my seat waiting for another 9-11 for years now ... sorry ... but the truth is, friends, if you haven't been at least a little paranoid over the weird happenings of the last seven years you haven't been paying attention ...
Posted by Jody Paulson at 5:31 PM No comments: