I wonder how long this is going to stay up here! :)

Posted by Jody Paulson at 1:29 PM No comments:

My take on the Parkland Florida shooting

I tend to be biased on the side of "hoax" these days. Personally, I think this is Sandy Hook 2.0. The hands down expert, in my experience, regarding Sandy Hook would be Wolfgang Halbig. It would be worth it to follow any investigations he does on this particular case.

Help this 71 year old former Florida State Trooper out of Miami, Florida understand how the National News Media knows about the school shootings before we get to hear it or see it.

THis is a clear violation of my Civil Rights for announcing school masacres before they happen. pic.twitter.com/La91IGILUl

I saw a video from Australian youtuber Peekay (cursing excessively as usual); an apparently empty gurney is wheeled into a facility (Broward Health North) while the newscaster clearly says we just saw the supposed shooter, Nikolas Cruz wheeled into the hospital.

First of all, why'd they have to wheel him in on a gurney? I saw the video and the gurney looked empty to me! Reminds me of the time I played Juliet in a school play and the prop guy lost track of the dagger I was supposed to kill myself with, so I had to kill myself with an imaginary dagger. Apparently most of the audience didn't notice. Never underestimate people's willingness to suspend disbelief! Anyway, I'd put that video up for you, but it must have given Peekay another strike so he deleted his channel yet again. Here's his new one. If you can find another video with that content save it on a different platform than youtube, upload it or whatever because it's pretty damning evidence! Then let me know about it so I can link to it.

Then there's the horrendously bad crisis actors. I mean, one victim's dad made Gene Rosen from Sandy Hook look like Sir Laurence Olivier. They all seem to talk about multiple shooters, one said they thought it was a drill, but I think this is all red herring shit to get people chasing their tails. The girls who spoke about these multiple shooters, who were supposedly in danger for their lives, sounded like people describing scenes from an action movie. As an actress, I can tell you that grief and terror are among the hardest emotions to fake. The "witnesses" I've seen so far aren't convincing.

Of course that doesn't mean the shooting isn't real, it could be the only witnesses allowed to speak to the press are fake, but ... I think the guys who orchestrate these events have found, over time, that it's just easier to fake the whole thing ... there's more control over the whole process and less people to object. But make no mistake. The ultimate end the fakers want is no less terrifying ... not only are they attacking the 2nd amendment, they're attacking the 1st, 4th and 5th amendments as well. Check out American Everyman's video on this subject:

I'm sorry but I think this woman is putting on an act:
Grieving mother (one day after the event)

I can only imagine what kind of Alpo-Spam-C-ration shit the poor will get in their "care packages." They won't be able to make choices about whether or not their food has GMOs, is vegan or vegetarian, anything about special diets or food allergies ... In my experience, this is what the poor might expect: 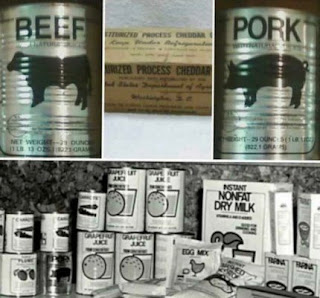 I'll be honest with you, I won't eat half that crap. Even if I go hungry. It's totally anti-health, anti-choice, and anti-free market. This is about keeping slaughterhouses and big Agrobusiness in business.
Posted by Jody Paulson at 11:39 AM 1 comment:

Posted by Jody Paulson at 8:56 AM No comments:

Sorry I haven't posted in a while, folks. The weather has been nasty over here in Indiana and I've been a little sick. But I'm very happy the Nunes Memo made it to the public unredacted. I tried to read the thing myself but I'm terrible when it comes to "legalese" ... here's what one very articulate man from Twitter has to say about it:


OK. I try to be a reasonable guy. But let me get this straight. An incumbent political party pays a retired foreign spy to gather op research, then dresses up that op research as official intel to authorize surveillance of folks in the opposing party. Did I miss anything? (1)

I remember Watergate. I was in high school but I followed it closely. This is way worse that Watergate. The only thing worse would be to hire someone to gather op research on a foreign head of state, then dress it up as intel, and use that intel to go to war. Y'all hear me? (2)

And to add insult to injury, the mainstream media, a major political party, law enforcement and intel agencies, and in a word, a big number of institutions think this type behavior is OK. WTF, y'all? What have we become? Did people struggle and die for this?

Here's what Scott Creighton from American Everyman has to say about it. He also thinks the recent stock market crash is a warning to Drumpf, which I also think is true. Read about that here.