Prepare for the Collapse of the US Dollar

I just read an article listed at whatreallyhappened.com:

Saddam Hussein May Get the Last Laugh
http://www.silverbearcafe.com/private/lastlaugh.html

This reminds me of an old radio commentary of mine:
http://www.globalpublicmedia.org/transcripts/319

One of the best hedges against a falling dollar is to invest in precious metals, like gold. If I had any money a few years ago, I would have doubled it today because I would have invested in silver and gold. Too bad I've been totally broke since the end of 2001.

BTW, I'd also recommend keeping your gas tank full this summer. You never know when the price might suddenly shoot up a few bucks a gallon ...
Posted by Jody Paulson at 12:36 PM No comments:

Sorry, this blog was locked down for a while ...

A week or so ago, I went to post something on here and I got a message saying my blog was locked because it had been suspected of being used as a SPAM blog, or something like that ... I had to get it cleared. I suspect this had to do with a weird, code-like looking comment I got to one of my posts ... until I have enough time to figure out how to moderate my comments I've disabled the comments section for the time being ...

Anyway, there's some big news relating to the congressional district in San Francisco that doesn't appear to be getting any coverage at all -- not only was Cindy Sheehan, the most recognized peace activist in the country, arrested at Congressman Conyers's D.C. office yesterday, she has announced that she'll be running against San Franciscan congresswoman and Speaker of the House Nancy Pelosi [ http://www.truthout.org/docs_2006/072407F.shtml ].

Amazingly, I can't find anything about this on the SF Chronicle right off-hand ... the front page story appears to be a hit-piece on the homeless, and how they are ruining Golden Gate Park. (This is ridiculous, BTW. I've lived in scores of places in the last couple of decades, and Golden Gate Park is the grandest, most beautiful city park I've ever seen.)

Paul Craig Roberts: "Impeach Now -- or Face the End of Constitutional Democracy"
http://www.911blogger.com/node/10017
A must-read article by a noted conservative about why impeachment is absolutely necessary.

September 11: See and Hear For Yourself
http://portland.indymedia.org/en/2007/07/362502.shtml
A valuable archive of first-hand audiovisual resources on the events of September 11.

The Whitehouse Coup
http://www.bbc.co.uk/radio4/history/document/document.shtml
A BBC radio program about a fascist coup plot in 1933 -- backed by right-wing American businessmen (including Prescott Bush) and foiled by General Smedley Butler (author of "War is a Racket").

Posted by Jody Paulson at 12:54 PM No comments:

Lessons from the past

Andy Griffith vs. the USA Patriot Act
Andy lectures Opie: "Whether a man is guilty or innocent, we have to find that out by due process of law."
http://www.ifilm.com/video/2816011

"Every gun that is made, every warship launched, every rocket fired signifies, in the final sense, a theft from those who hunger and are not fed, those who are cold and are not clothed." -- Dwight D. Eisenhower this speech before the American Society of Newspaper Editors, April 16,1953:
https://ideotrope.org/index.pl?node_id=23495
Posted by Jody Paulson at 10:32 AM No comments:

Sheehan may challenge Pelosi in 2008 election

Six weeks after announcing her departure from the peace movement, Cindy Sheehan said yesterday that she plans to run against Nancy Pelosi unless the House speaker introduces articles of impeachment against President George W. Bush in the next two weeks.

I think this is a brilliant move on Cindy's part. I'm one of Nancy's constituents, and I've been carrying around a sign that says "IMPEACH CHENEY" for the last few weeks -- and let me tell you, people are ready to force the issue.

Last November, almost 60% of San Francisco voters backed Proposition J to impeach the Bush and Cheney. [ http://sfgate.com/election/races/2006/11/07/CA/c/i_measure_sf/i_j_call_for_bush_cheney_impeachment/g_general/c/san_francisco.shtml ] I think Cindy has a genuine chance of winning, especially since San Francisco uses Instant Runoff Voting, which gives third party candidates a fighting chance because it eliminates the "spoiler effect." [ http://www.fairvote.org/irv/?page=1895 ] If Nancy won't put impeachment back on the table as the Constitution requires, I'll be one of the voters to show her the door. 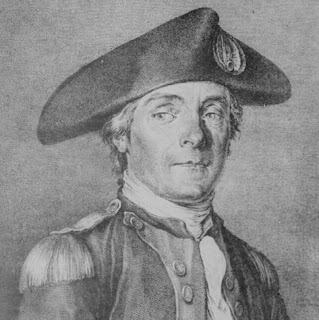 In light of the fact that today is the 260th anniversary of the birth of John Paul Jones, I'd like to share part of a letter he wrote to his friend and fellow Revolutionary War hero the Marquis de Lafayette:

"I am glad that the new Constitution will be, as you tell me, adopted by more than Nine States. I hope however they will alter some parts of it; and particularly that they will divest the president of all Military Rank and command; for though General Washington might be safely trusted with such tempting power as the Chief Command of the Fleet and Army, yet, depend on it, in some other Hands it could not fail to Overset the libertys of America. The President should be only the first Civil Magistrate, let him command the Military with the Pen; but deprive him of the power to draw his Sword and lead them, under some plausible pretext, or under any Circumstances whatever, to cut the throats of a part of his fellow Citizens, and to make him the Tyrant of the rest." [Source: Jefferson papers, Sept. 9, 1788]

It turns out that the Constitution has held up pretty well over the centuries, and most of America's recent problems stem from our subverting or ignoring it. But it also seems to me that our recent forays into Imperialism stem from the President's power to order major military actions without any Congressional or public oversight. How many millions of people have suffered or died because of the "police action" of Vietnam?

One can only speculate on how prudent it was to give the president the power of "Commander-in-Chief." But it seems to me should be more difficult to conduct a war, and that people who have deliberately avoided combat (like Clinton, Bush and Cheney) should not be able to individually and personally order young people to their deaths on missions they would never have performed themselves.
Posted by Jody Paulson at 4:41 PM 1 comment: