Cindy Sheehan calls for a revolution


Cindy Sheehan Speech at Fat City, 6/28/08 from fogcityjournal on Vimeo.

Posted by Jody Paulson at 10:53 AM No comments:

Check out this article I saw on prisonplanet.com:

Mere Exposure to John McCain Can Be Dangerous

When I first saw the title I thought it had to do with how, when he visited those Iraqi merchants for his photo-op a few months ago (see video from my June 10th post), they all ended up murdered the next day. But no, this was about subliminal messages, which I have suspected FOX and other news outlets of perpetrating a long time ago. Did you ever notice how all that distracting, hypnotic scrolling and general visual excess and overwhelm started immediately after 9-11-01?
Posted by Jody Paulson at 11:45 PM No comments:

Scare as Sarkozy departs Israel
"Confusion has marred French President Nicolas Sarkozy's farewell to Israel, after a soldier shot himself dead during an airport departure ceremony."

But Israeli news says this:

"The soldier, who was part of the honorary guard, was reportedly wounded when a gun misfired. The incident is under investigation." (Eli Senyor)

Video here.
Posted by Jody Paulson at 11:34 AM No comments:

I have had the good fortune to have met both of these wonderfully warm, brave ladies. Please support them both in their relative campaigns (Cynthia as green party presidential nominee, and Cindy as congresswoman to San Francisco's 8th congressional district, which happens to be Bush appeaser Speaker of the House Nancy Pelosi's district). Both women support a real investigation into what really happened in this country on Sept. 11, 2001.

Here's what I got in my email:

As a sign of tightening opposition to the string of hope-reversing policies being put forward by Speaker Pelosi, Green Party Presidential and pro-peace candidate Cynthia McKinney agreed to serve as an Honorary Co-Chair of Cindy Sheehan's campaign to oust Nancy Pelosi from Congress. "Nancy Pelosi needs to phone home, because it's clear that she's forgotten the values of the people of California who sent her to Congress. The point was to change Washington, DC, but instead Washington, DC changed Nancy Pelosi," commented McKinney, a former colleague of Pelosi.

McKinney first declared her independence from the national leadership that voted its complicity in war crimes, torture, crimes against humanity, and crimes against the peace at an anti-war demonstration in front of the Pentagon in March of 2007. At that time, McKinney lamented that the Democratic majority in Congress had failed to repeal the Patriot Acts and the Bush tax cuts, introduce and pass legislation for a livable wage and investigate the Pentagon's admitted "loss" of $2.3 trillion. McKinney bolted the Democratic Party afterwards, declaring her candidacy for the Green Party's nomination in December 2007. Today, McKinney adds to that list Democratic leadership's failure to pass legislation providing for a single payer health care system in our country and its inaction on the foreclosure crisis gripping homeowners.

McKinney first publicly endorsed Cindy's Congressional campaign last year in Kennebunkport, Maine near the home of George Herbert Walker Bush. According to McKinney, "Cindy's campaign is increasingly important today as the only way left to put peace, impeachment, and our values back on the table." McKinney added, "Cindy continues to show us the power of one, the power that is within every one of us. Moreover, Cindy Sheehan can win."

"Having Cynthia on board is a significant gain for my campaign. She has experience in tough campaigns and brings a wealth of knowledge. I am running to win, we have already raised close to $200,000 and everyday we get more and more support as people get more fed up with Pelosi's mis-leadership," says Sheehan.
Since the Democrats assumed control of Congress, according to some reports, an additional 1,200 U.S. troops have died and nearly 10,000 more have been wounded, with tens of thousands more Iraqi civilians killed. Hundreds of billions of additional dollars have been appropriated for war and occupation under Pelosi's watch and she took impeachment "off the table." Both Cindy and Cynthia are members of the New Broom Coalition, founded by Dr. Carol Wolman, the California Green Party's First Congressional District candidate, a Coalition that seeks to empower the people by putting a clean sweep to Congress.

Currently, McKinney is preparing to head to Chicago for the Green Party Convention July 10 - July 13. Sheehan is anchored in San Francisco campaigning for the first hurdle of collecting 10,198 signatures needed to get on the ballot in November as a " Decline to State / Independent" candidate.

Posted by Jody Paulson at 7:31 PM No comments:

I'm visiting my parents' house right now, but I haven't had much time to write anything new. I just read that the Democrats betrayed the American people yet again with the FISA law and of course, earlier by signing off on more war funding. It's obvious to me that the Democratic party is corrupt to the core and I'm not sure the system can be fixed from within anymore. But I've been pessimistic before. Here's an old post from almost exactly 2 years ago:

A frog checks the temperature

Earlier this week I had the misfortune of having to listen to Tim Russert's fawning eulogy blaring in the background (my mom wouldn't let me change the channel -- "He was a great man!" she said) as I read this story about American torture victims. All the more reason to ask this question:

Who frames the questions we ask ourselves?

Well, I have to get off the Internet. Will write more when I have time.

Posted by Jody Paulson at 5:05 PM No comments: 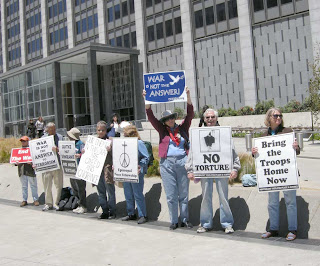 "Every Thursday since the United States started bombing Afghanistan in October 2001, several men and women have stood on the street in front of San Francisco's Federal Building in a quiet vigil for peace."

There's stuff like this going on in cities all over the country. I've been going to this particular one for well over a year now. I intend to be there today, too. (That's me in the pink hat.) 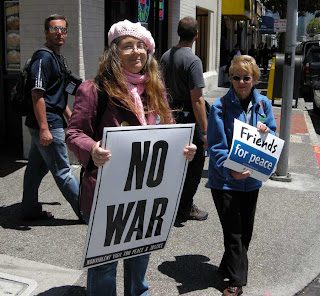 Posted by Jody Paulson at 9:19 AM No comments:

I wish I could have sorted out a theme for this entry, but it's been so long since I've last written I figured I'd just throw together a hodge-podge of stuff I'd like people to look at and consider -- you know, stuff *they don't tell you*.

It certainly didn't seem like a major news item the morning after Dennis Kucinich listed out 35 articles of impeachment against George W. Bush on C-SPAN yesterday. He did a great job listing them out -- he was on for hours, Mike Malloy had him streaming live on his radio show. Each and every one of those articles detailed a serious crime against the American people and our constitution. Just now I went to CNN.com to see if I could find any articles about it. Not a one.

But we all know the revolution won't be televised, don't we?

No, they only televise lies, like this one -- here's the Republican presidential nominee, clearly and shamefully lying about something you'd think would be pretty damn important to the American people: the success of the Iraq occupation we've been paying for with our blood and dollars.

Posted by Jody Paulson at 6:26 PM No comments: