The Richard Gutjahr Saga Gets Even More Preposterous (video by Peekay)

Posted by Jody Paulson at 12:38 PM No comments:

I haven't been on my blog for a while, and I apologize for that, but a lot of stuff happened over the weekend (when I can't even get to the library) and it all seems so much like same ol' same ol' BS ... it's like, where do you start? The lame-ass RNC? The coup in Turkey? More phony police shootings? So now that everyone's mind is a little clearer, let me just go back to where it all seemed to go wrong last week, the truck attack in Nice, France. Here are a couple of videos, the first is from Truth Media Revolution and the second comes from Peekay.

Saesch1 makes a good comment on the first one: "They are making it increasingly easy these these days. when scores of bodies are left on the spot with sheets on the them: it's fake. people just forgot the protocol: whether you're breathing or not, have a heartbeat or not, as long as your head is still on, you get rushed to a hospital, even if it's only for organ harvest."

Also, Northern Truth Seeker brought this to my attention from Jim Stone: " Supposedly this guy went on a 40 MPH rampage for 30 minutes. But he only went 1 mile. Common core failure. COMMON CORE BREACH! 40 mph for 30 minutes equals 20 miles. To cover only one mile, he could have only been going two miles an hour."

Posted by Jody Paulson at 11:46 AM No comments:

Posted by Jody Paulson at 11:00 AM No comments:

What do you think? Crisis acting or not?

Posted by Jody Paulson at 8:37 AM No comments: 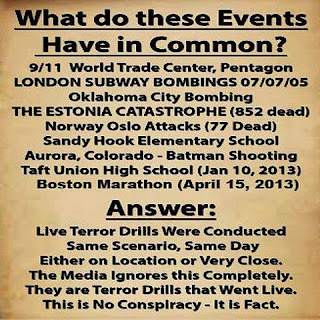 I expected something bad would happen today. Believe it or not, I "predicted" something would happen the day of the Benghazi attacks as well, simply because they were on the 11th anniversary of 9/11/01, which were themselves 11 years after Bush Sr.'s now infamous "New World Order" speech. It appears I may be right about today, already there's been a suspect package in London Parliament leading to a lockdown. Everybody please be calm. Things are most definitely not what they seem, esp. these days.

Much has been written about the 7/7 bombings being a false flag. One of the more celebrated videos for this is called "The Ripple Effect." I'm not sure I've seen that one but I do know 7/7 is one of many #DrillsGoneLive. Check this out: Peter Power 7/7 Terror Rehearsal

I feel really bad about the London Bombings, though. People mock me on more conventional sites I post at regularly, saying I think everything is a hoax. I worry that the London Bombings weren't, though ... it may have been the turning point where real patsies and victims were replaced with silly crisis actors. I don't claim to know anything, though, that Holmes kid from the Aurora Theater Shooting looked like he had been genuinely pumped up with drugs his entire trial. Jahar Tsarnaev's twitter account made him out to be a pretty normal, likable young man. The back stories on many of the "London Bombers" were similarly suspect, because rather than fitting an "extremist" profile, many seemed like exceptionally nice guys.

Oh, well, just thought I'd write something today and let you all know I'm still around and trying to take everything in. I feel like there's a lot of people who would rather I just shut everything out, but that's not what I've been put on this Earth to do, so I can't. So I'll try to stay on top of further developments that may happen today. Take care, everyone! :)

Posted by Jody Paulson at 8:35 AM No comments:

When the internet suddenly shuts off, Benny and Delman seek refuge and WiFi at The Joint.

"KillSwitch" is the pilot episode of a JoyCamp sketch comedy show.

Posted by Jody Paulson at 9:31 AM No comments: