Remember the neighbor guy who cried about the children when the Sandy Hook shooting went down? The first video should remind you. The second video proves he worked for FEMA. Check out the kids who are with him down in Texas, too.

Posted by Jody Paulson at 7:44 AM No comments:

Posted by Jody Paulson at 2:34 PM No comments:

The Torture of Shaker Aamer 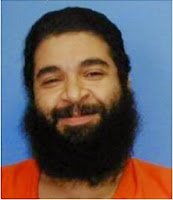 It's been a while since I've looked into the atrocities of Guatanamo Bay prison, but a psychiatrist's report was recently released by the lawyer of Shaker Aamer, who said,

" – On more than one occasion an official of the United States threatened to rape Aamer’s five year old daughter, with one interrogator describing in explicit sexual detail his plans to destroy the child;

– “Welcoming Parties” and “Goodbye Parties” as Aamer was transferred among U.S. facilities. Soldiers at these “parties” were encouraged and allowed to beat and kick detainees as their proclivities and desires dictated. Here’s a video of what a beating under the eyes of American soldiers looks like.

– Aamer was denied medical care as his interrogators controlled his access to doctors and made care for the wounds they inflicted dependent on Aamer’s ongoing compliance and repeated “confessions.”

– Aamer was often kept naked, and his faith exploited to humiliate him in culturally-specific ways. He witnessed a 17 year old captive of America sodomized with a rifle, and was threatened with the same.

– At times the brutality took place for its own sake, disconnected from interrogations. At times it was the centerpiece of interrogation.

– The torture of Aamer continues at Gitmo, for as an occasional hunger striker he is brutally force-fed."

I know I'm not exactly a prisoner at Gitmo, but I feel a resonance with the people being held there. When they say they believe the CIA interrogators use "djinn," I wonder, are these the kind of psychotronic weapons that I believe have been used on myself? I have often thought that Gitmo is being used as one big research center and their hapless prisoners are being used as lab rats.

Lawyers for Shaker Aamer claim he has suffered PTSD because of his treatment, urge his immediate release
April 7, 2014 6:06PM ET
by Peter Moskowitz @ptrmsk

The last remaining British resident being held at Guantanamo Bay is in dire need of medical and psychiatric help, according to U.S. court documents filed Monday urging his immediate release on health grounds.

The legal papers, which include a mental and physical analysis of detainee Shaker Aamer’s health by an independent American physician, provide a glimpse into life at the detention camp in Cuba, detailing the effects of isolation, alleged torture, and hunger strikes.

Aamer was picked up Afghan troops in 2001, and transferred to Guantanamo after a stint at Bagram Airfield, a U.S. military base in Afghanistan, in 2002.

He has never been charged with a crime, and was cleared for release by both the Bush Administration in 2007, and the Obama Administration in 2009. But despite the clearance, and repeated pleas from human rights groups and the British government, Aamer has remained at Guantanamo.

Now, his lawyers say that unless he is released and given intensive, long-term medical care, his conditions could become worse. As such, they have filed a motion in a Washington D.C. District Court calling for his immediate release.

Aamer’s health was documented in a 25-hour in-person review by U.S. psychiatrist Emily A. Keram on behalf of Aamer’s lawyers at legal rights charity Reprieve.

The review paints a bleak picture of a man struggling to maintain his grasp on reality as he is allegedly systematically isolated and tormented by guards.

Aamer told Keram that he was tortured both at Bagram and at Guantanamo. Upon his arrival at Guantanamo, he was allegedly kept in an outdoor cage without protection from the sun or inclement weather for an extended period. Once indoors, he said he was kept in cells isolated from other prisoners and guards for up to four months at a time.

Aamer also claimed that guards would tie up and interrogate him for 36-hours at a time without letting him take breaks for the bathroom.

U.S. military officials would not comment on Aamer’s case.

Keram’s report concludes that Aamer’s detention and treatment have left him with severe edema, liver problems, and other medical issues. The report also says that his isolation has caused him to hallucinate and have paranoid delusions. Keram believes the detainee is suffering from post-traumatic stress disorder.

“The worst thing about torture is that you don’t know how to think, what to do, how to feel,” the court documents quote Aamer as saying to Keram. “It’s terrible. We believed that the people here: the CIA, the interrogators, use ‘djinn.’ (spirits) … Some of the things that happened, you can’t explain. Some people (would) think that it was drugs or something, but 95% of us believe we got possessed by djinn.”

It’s unclear whether the court filing will have any impact on the potential for Aamer’s release or that of others. While President Obama has called for closing the base, over 160 detainees remain.

According to leaked files, U.S. officials believed Aamer once met with Osama bin Laden, the late Al-Qaeda leader, and led a unit of fighters against NATO troops in Afghanistan. But his supporters say Aamer suffered terrible abuse while in captivity and that an alleged confession was made under the pain of torture.

Aamer is not the only Guantanamo detainee who has claimed maltreatment at Guantanamo. Dozens of detainees have gone on hunger strikes to protest their indefinite detention and the way they are treated. But following the latest hunger strike, the United States stopped releasing information about the protests. The U.S. has also come under fire for force-feeding those on hunger strike. 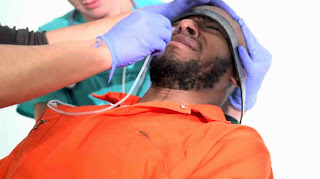 Posted by Jody Paulson at 11:25 AM No comments:

There's a lot you can learn by studying patterns in history.
http://www.infoplease.com/dayinhistory

Today is the alleged anniversary of Jahar Tsarnaev's infamous #fakeboatnote ... also, the death of his brother Tamerlan, the Oklahoma City bombing, Waco, and the battle of Lexington and Concord, and I guess the Exodus, too. Library's closed tomorrow, so I'll take this opportunity to wish everyone a very Happy Easter! 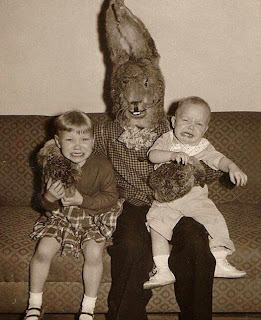 Posted by Jody Paulson at 1:24 PM No comments:

On April 15th, 1912 the RMS Titanic sank in the North Atlantic. Despite the fact that there weren't enough lifeboats, safety procedures were antiquated and this happened at night, in a remote location, in the iciest waters imaginable; over 700 survivors were recovered from the scene.

Flash forward exactly 102 years later. A modern ferry boat somehow capsizes off the busy coast of South Korea (what, did it hit an iceberg?). Now, if I were captain, I would have done two things immediately the minute I saw we were in distress: (a) call for help, (b) order everyone on board to follow the well-established safety procedures that undoubtedly exist for that vessel, which almost certainly include getting to a place where they can board a lifeboat and put on a life jacket. You know, those bright orange thingamabobs that float? They're designed to keep your head above water, even if you're dead or unconscious, so if you're wearing one it makes kind of hard for rescuers to miss you. I don't know where that Korean ferry was going, but I've been on a few ferries in my life ... crossing the English Channel, visiting the Orkney Islands in Scotland, and more recently crossing the San Francisco Bay. I don't recall anyone having their own private cabin! I mean, that's not a ferry ride, that's a cruise ...

I don't know what's going on with that ferry but the initial photos I saw at home showed photographs of some ship that had clearly run aground and tipped over, if she were ever real at all (she looked more CGI than the Titanic in the 90's film with Leonardo DiCaprio). The newspeople were asking questions like, "How long can a person survive in these cold waters?" "--Only two hours so everone who fell in the water must be dead."

Again, this didn't happen in the remote North Atlantic over a hundred years ago. Honestly, how long do you think it would take for someone to rescue your ass if you ran aground off the coast of South Korea in the light of day? Two hours? Really??? 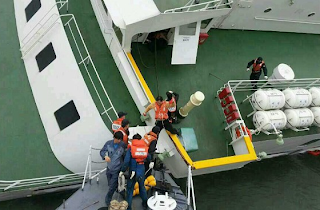 Posted by Jody Paulson at 7:43 AM No comments:

Big changes due this week

I'm normally not this confident about airing my intuition, but I've got a lot of astrological evidence to back me up. Tomorrow is the first anniversary of the phoney Boston bombings, and I've got the feeling we're going to see a lot of nasty revelations come to light. Historically, a lot of bad things that people were lied to about happened in the month of April, and tomorrow is a "blood moon" -- a total lunar eclipse. Read more about that aspect here:

Take care, everyone, and don't forget to print out the stuff that's important to you! :)
Posted by Jody Paulson at 7:57 AM No comments:

Another funny video from JoyCamp.

Posted by Jody Paulson at 11:58 AM No comments: