[I just got an e-mail from Code Pink, for whom I used to volunteer when I lived in San Francisco]

Tensions are escalating again as we continue to watch the fallout from the Trump administration’s manufactured crisis with Iran. Last week Iran seized a British oil tanker — Britain had seized an Iranian ship at the beginning of July. Now Iran says it has arrested 17 CIA-trained spies, and some have been sentenced to death. To top it off, the Trump administration announced that it is deploying 500 troops to Saudi Arabia, the arch-rival of Iran.

The Iraq war was devastating. The idea of repeating this colossal failure—on an even bigger scale, with zero justification and no plan for what would come next—is terrifying. Here are a few actions you can take:

A joint congressional committee will soon be appointed to iron out the differences between the House and Senate versions of the National Defense Authority Act (NDAA). Send a message now to your Representative asking them to pressure Speaker Pelosi to make sure the House’s No War With Iran amendment is included in the final bill that arrives on Trump’s desk.

Contact your Senators and ask them to support Senator Udall’s legislation to prevent a war with Iran.

Tweet at Congress, tell them that they have a responsibility to keep us out of a war with Iran

Representative Ro Khanna responded to Iran’s arrest of 17 accused CIA spies by tweeting: “If true [that they were spying], we need more transparency and more answers about what the CIA is doing in Iran. What is the CIA’s goal here? We should not support any regime change in Iran, and instead, learn from the 1953 overthrow of Mossadegh.”

Before the theocratic government of Iran today, there was the brutal Shah who came to power following the CIA overthrow of Iran’s then democratically elected, pro-Western government. Under the Shah, a contract was signed with the British Anglo-Iranian Oil Company giving Britain exclusive rights to the country’s oil for the next 60 years.

Public ire over the giveaway of Iran’s biggest resource culminated with the 1951 election of Mohammad Mossadegh, who introduced a bill — unanimously approved by Parliament — to nationalize the country’s oil. Britain responded by appealing to the US and then in 1953, the CIA orchestrated a coup, reinstating the Shah.

Mossadegh’s removal in 1953 ended up having a tragic impact on US-Iranian relations and of course the Iranian people. The Shah gained even more dictatorial powers and all secular parties and organizations that had opposed the Shah were dismantled and banned, setting the stage for the 1979 Islamic Revolution.

Since 1979, US policy towards Iran has largely been one of economic strangulation through a variety of sanctions in an attempt to foment a counter-revolution. It was only thanks to Obama getting the nuclear deal that the tide began to turn, but then came Trump, who tore the deal to pieces.

The Trump administration’s campaign of “maximum pressure” only vindicates Iranian hardliners who say “See, we told you that you should never have made a deal with the US in the first place.” Those hardliners are becoming more powerful, cracking down on dissent. So the Iranian people pay the price, both from suffering under the sanctions and the conservative backlash.

If you haven’t picked it up yet, get Medea’s book Inside the Islamic Republic of Iran to learn more and take action to stop a war with Iran by telling Pelosi to make sure the No War with Iran amendment is included in the NDAA. Remember to also ask your Senators to support Udall’s legislation, and take action on social media.

BEST Moon landing documentary proving it was a HOAX!

Major Incident In Strait of Hormuz What The Media Is Not Telling You! Chris Pratt In Hott Water???

This is from the "We Are Change" youtube channel.

Posted by Jody Paulson at 6:38 AM No comments:

I've added a couple links to my website. One is for Moongiant, just because I like to know what phase the moon is in (today happens to be a full moon/partial lunar eclipse in Capricorn) and the other is for "This Day in History." Which is often more significant than most people know. Today happens to be a particularly interesting day. In 1918, Czar Nicholas and his entire family were murdered by the Bolsheviks. In 1945, the first atomic bomb was tested in New Mexico. A private plane piloted by John F. Kennedy Jr. was lost over the waters off Martha's Vineyard, Mass. And of course, 50 years ago, "Apollo 11 blasts off from Cape Kennedy, Florida, heading for a landing on the moon."

But did it really? I don't think so, and many other intelligent bloggers and researchers think the same. If I have time I'd like to do a report on the connections between Hollywood director Stanley Kubrick and the Apollo Space Program. Was it all a staged event? I don't know how real this is, but here is an alleged confession by Kubrick. I've seen a few of his movies, and I have to say, the style in which the moon landings were presented certainly remind me of his directing. BTW, today also happens to be the 20th anniversary of the release of Stanley Kubrick's final film, "Eyes Wide Shut."

Danny in the Stanley Kubrick movie, "The Shining" 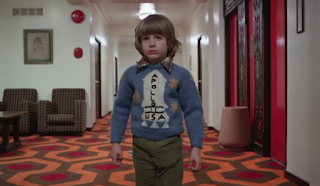 Epstein Stories You Won't Find in the News (video)

Posted by Jody Paulson at 10:38 AM No comments:

This is from Nomadic Everyman. As you can probably tell from watching this, Scott has been having some serious medical issues lately. I'm sure he would appreciate your positive thoughts and prayers.

Posted by Jody Paulson at 12:03 PM No comments:

This guy knew everybody ... Democrats (like the Clintons), Republicans (like Drumpf), and Hollywood big shots (like Kevin Spacey). What will be revealed following these charges? I sincerely hope this rips open a huge nest of filth that has been festering for decades ... sunlight is the best disinfectant. Both these videos are from We Are Change.

UPDATE: Was Epstein a deep asset for the State Department?


Labor Secretary Acosta isn’t the only one that think Jeff Epstein was a deep asset for the State Department. Jeff’s plane ends up in the hands of Paul Whelan and he even share a Stratfor subscription with him. pic.twitter.com/HXk4onW2Ct

Posted by Jody Paulson at 11:54 AM No comments:

It will be the 14th anniversary of the London Underground Bombings. I won't be able to post tomorrow, so I decided to remind people today about how recent terror operations so often coincide with drills. Here's a video of Peter Power explaining how the London bombings just happened to occur in the midst of an exercise designed to train for the exact same scenario.

Posted by Jody Paulson at 10:40 AM No comments:

This would include a little girl and a baby.
Syria war: Israeli jets ‘hit Iranian targets in Homs and Damascus’

In other news, a guy I used to read all the time, Justin Raimondo of Antiwar.com, died of lung cancer. I don't know how many of my favorite writers and bloggers have died of lung cancer in the past several years, but there have been way too many. It sucks when cigarettes do the censors' jobs for them.
Posted by Jody Paulson at 9:51 AM No comments: