This gaffe was originally pointed out by a bunch of people on Twitter. The following is the original footage from "Trump White House" who captions his video as "CNN Drew Griffin crew rescue man from Car Drifting in Flooding Waters in Beaumont, Texas." Notice Griffin runs toward the drifting vehicle, the camera cuts away, and you see someone wearing a red jacket, sandals and khaki shorts run behind a handicapped sign, which conveniently blocks the "rescue." It looks like the person wearing the khakis & sandals is Griffin. But in the next shot, after an obvious edit, you see Griffin pulling the guy out of the water wearing pants. There's another guy with him wearing shorts but he's not wearing sandals, they look like dark boots. And obviously Griffin still has his (hand-held) mic with him because you can hear him clear as day. Now, if that wear me, I would have ditched the mic. Just saying.

The CIA Preps Their Next JFK Psyop (video from Corbett Report)

"We all know that the last of the JFK assassination records are due to be declassified in October. And we even know what the government says it's hiding from us. But do you know the story that the CIA is trying to plant in the public consciousness about what is going to be 'revealed' in these documents?"

Posted by Jody Paulson at 9:17 AM No comments:

The DNC Fraud Lawsuit Has Been Dismissed

[I agree with Caitlin Johnstone. The Democratic Party has proven itself to be a fraud and anyone who contributes to it is a sucker. It belongs in the trash bin.]

The DNC Fraud Lawsuit Has Been Dismissed. Dismiss The Democratic Party.


The oldest political party in the world has died. It doesn’t know it yet, it isn’t acting like it yet, but it is dead. By successfully getting the DNC fraud lawsuit dismissed by Judge William J. Zloch today, the Democratic party has succeeded in killing any argument for its continued existence as a legitimate political party.

The premise of the DNC fraud lawsuit was simple: the Democratic National Committee promised voters an impartial party primary, and in 2016 it did not deliver them what it promised. By taking donations from people who believed its promise of impartiality, it committed fraud, in the same way a company selling a product labeled “sugar free” would be committing fraud if its product was loaded with maple syrup.


[link to rest of article]
Posted by Jody Paulson at 8:24 AM No comments:

9/11: perspective of a retired firefighter

This was written by Greg Bacon, who served over 20 years in a midwestern city.
9/11: perspective of a retired firefighter 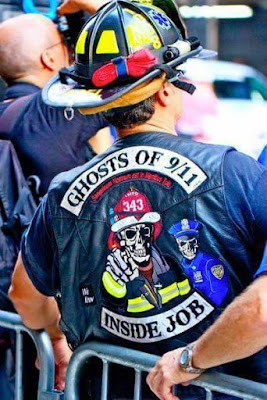 I'm not quite sure what to do with this blog ...

When I first started this website, I really wanted to get out to people certain things that were absolutely not being talked about on the mainstream news. I knew the mainstream media was lying to us about 9/11 and covering up evil schemes by the Deep State like geoengineering (chemtrails), Cointelpro-like harassment & gangstalking, plans to microchip us all, take away our Bill of Rights, etc. Obviously a lot of things have happened in ten years. I learned about "crisis actors", staged terror attacks and started a Twitter account, which frankly suits my limited attention span better than blogging.

At the time, I thought the title "What They Don't Tell You" would be fine. It was the name of a series of radio commentaries I did back in 2004-2005. Now I'm at the point of not even wanting to know what they tell you. Because they're all lies. ISIS is a lie. Pretty much all of these so called "terror attacks" are fake. I'm starting to think like I've been acting like a dog chasing her tail. Once people understand the news is pretty much fake, they can decide for themselves what to do about it. As for me, I'm not sure what's real and what isn't and to be honest, I simply can't keep up. I don't want to watch the mainstream media anymore. I'm not an expert on the Middle East and even if I were I'm in no position to know what's really going on over there. So how can I tell you "What They Don't Tell You?"

I know there are a lot of people out there that still don't know about false flags, staged events, and what happened on 9/11/01. I still want to wake these people up. But I don't know what's going on in Syria, Venezuela, North Korea, etc. so I'm probably not going to talk about them anymore. I'd like to just stick with what I know. War is stupid. It's a racket. The Global Elite make big money funding both sides of a conflict. They are the real terrorists. They scare people into hating each other, blinding them to the fact that they are constantly being robbed and exploited by another group altogether.

I'm not sure how to end this post, but I just want to let you know that, despite the title of this blog, I can't possibly tell you everything they are not telling you because I'm not a know-it-all and I don't want to know what they're saying anymore, anyway. Because it's all bullshit. I'll keep posting what I like but I'm going to start steering away from up-to-the-minute breaking news because what is important is that more and more people understand the bigger picture.
Posted by Jody Paulson at 1:55 PM 3 comments:

We Are the Village Green Preservation Society

This song has been running through my head a lot lately. This morning it struck me. I've been acting just like the misguided people in the song.

I'm not a Southerner and most certainly not a white supremacist, but I admit I've been a bit put out about a bunch of "politically correct" Soros-backed self-righteous outsiders shouting to pull down monuments to people's great grandfathers (many times removed) who fought in a war that was as much about state's rights as anything else, or at the very least to protect their own version of "the village green," a cause which might be considered no less noble than the right for Halliburton to make money in Iraq.

As Scott Creighton points out in this video, slavery still exists in this country and no one's doing a damn thing about it. Think of all the prisons that break up families and take good jobs away from "law-abiding citizens." They're packed with people of color whose only crime was possession of something the Deep State has been selling them for years. Then there's the sex slaves I've seen so much evidence of in San Francisco. That's real slavery, folks. Who's making money off that shit?

If you want to know who the real white supremacist racist fascists are, read this article: The story of Charlottesville was written in blood in the Ukraine.

So, what is the answer? To march around with pipes and hoods and torches fighting each other while the real fascists sit back and laugh in their halls of power, or refuse to play the game?

God/the universe is about to make a sea change on this planet. It will happen no matter what we do. I encountered this quote from Les Visible's Smoking Mirrors website yesterday. It gave me a lot of hope. It's from Romans 8:28 -- "All things work together to the good of those who love God." Sometimes you've got to let go and let the changes happen. I think the most important line in this song is the last one in the chorus, and it's got a deeper meaning than first appears: "What more can we do?"


Posted by Jody Paulson at 8:14 AM No comments:

[BTW, Scott Creighton of "American Everyman" wrote an excellent piece called "Charlottesville Attack: By Their Fruits You Will Know Them" which I highly recommend. Scott also made the second video, which I'm watching right now.]

Posted by Jody Paulson at 7:40 AM No comments:

If you ever wondered what happened to Australian video maker Peekay Truth, here's a fairly recent interview. I wonder what he would have to say about the this weekend's attack in Charlottesville.


Posted by Jody Paulson at 9:16 AM No comments:

A little perspective on the North Korean "crisis" 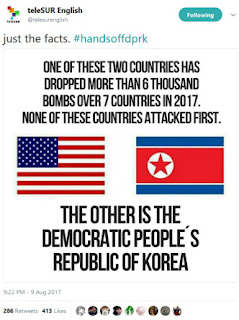 Posted by Jody Paulson at 8:05 AM No comments:

This hits close to home. Sinead O'Connor is a brilliant Irish singer/songwriter who shot to fame in the 80's.

The most honest three and a half minutes of television, EVER... (video)

"Beginning scene of the new HBO series The Newsroom explaining why America's not the greatest country any longer... But it can be."

Something Strange Is Going on with the Trump Family

Posted by Jody Paulson at 1:11 PM No comments: