This is just bizarre. Having a martial law drill and not telling anyone, not even first responders? What are they getting ready for, anyway???

Posted by Jody Paulson at 9:50 AM No comments:

Does Anderson Cooper interview anyone outside his studio?

I saw this video (supposedly shot at one of the funerals at Sandy Hook) and I immediately thought of the next one, which was supposedly interviewing witnesses of the Aurora Shooting in Colorado.

"This was probably filmed at CNN's studio with a green screen, not at the Noah Pozner funeral."

"Sound seems from a studio. Compare the background between 0:37 and 0:38. Or 2:38 with a bit later, cars/no cars in the background. Angle also different."

The Money Institution Must Be Ended - Anonymous Voice Over

My big question is, why should we pay interest on something the bankers made up out of thin air??? We're being robbed, folks ... it's time to come up with a better system.

Posted by Jody Paulson at 8:55 AM No comments:

In light of recent events, I thought I'd reprise my 2005 radio commentary, Media Fakery. If you haven't seen the movie Wag the Dog I highly recommend it. It really is that bad, folks.

In the 1997 movie "Wag the Dog" the president and his spin doctor hired a Hollywood producer to fabricate a war to cover up a scandal in the White House. I remember them filming a scene where a war-torn Albanian woman ducks behind a building clutching a kitten. In reality, the woman was a cheap actress ducking behind a blue screen clutching a bag of potato chips. Sometimes a movie can be more truthful than the nightly news.

If you want a good laugh, check out this story from Reuters: Was 'Abducted' U.S. Soldier a Toy? A monitored web site in Dubai, which incidently has been the main channel of communication in recent months for Abu Musab al-Zarqawi, recently posted a poor quality photo of a purportedly kidnapped US soldier threatened by an unseen assailant with an assault rifle. "Our mujahideen ... have managed to capture the American soldier John Adam after killing a number of his colleagues," said the Mujahideen Squadrons in the undated statement on the Web site. Actually, "John Adam" appears to be a GI-Joe type action figure made by Dragon Models USA. Assault weapon included. 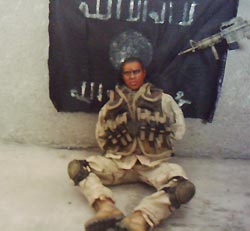 I could waste a lot of time explaining all the reasons I think anything having to do with al-Zarqawi in the past few months, including the beheading of Nick Berg, is a hoax, but there's been a lot of competent researchers doing that kind of work for me. Check it out for yourself! In March 2004, the leadership of Allahu Akbar Mujahedeen claimed al-Zarqawi had been killed by American bombing. If you think about it, it's actually neoconservative policy makers that have an interest in keeping his legend alive.

In a world of "Saving Private Jessica" and yellowcake uranium, what's there to believe anymore? This morning on my way to the studio I passed a newsstand declaring "Bush: Save Social Security." What??? An accurate headline would say "Bush Inc.: Loot Social Security."

American Heritage® Dictionary defines a shill as "One who poses as a satisfied customer or an enthusiastic gambler to dupe bystanders into participating in a swindle." I wonder if one could apply this definition to Jeff Gannon, a guy with virtually no journalistic background who enjoys unlimited White House press passes and gets called on repeatedly by Bush so he can ask him softball questions and attack Democratic Senate leaders for being "divorced from reality."

I guess you could call columnist Armstrong Williams a shill. He was secretly paid nearly a quarter million by the Education Department to promote its policy. And what would you call Bush's practice of sending out video press releases disguised as "news stories" by fake journalists?

Maybe Shakespeare was right. Maybe "All the world's a stage, And all the men and women merely players." But if you keep your eyes peeled, you might be able to catch a fleeting glimpse of that bag of potato chips.

I've already shared these with my friends on the Reincarnation Forum. The first two I found at Rense, I think, and the other one I found at the wonderful youtube channel of CGImaging (the Sacred Geometry teacher), which I'm adding to my favorite websites.

"Watch and judge for yourself whether you are witnessing genuinely grieved friends and family, or professional actors playing a designated role. I think the answer is obvious."

This guy's revelations are pretty devestating, if true ...

Posted by Jody Paulson at 9:34 AM No comments:

I think my New Year's resolution will be to focus more on the positive than I have been. Our thoughts are very powerful, and while it's important to expose the dirt, we shouldn't ruminate over it, should we? There's truth to this old Cherokee saying:

"My son, there's a battle between two wolves inside us all.
On is Evil. It's anger, jealousy, greed, resentment, inferiority, lies and ego.
The other is Good. It's joy, peace, love, hope, humility, kindness, and truth."
The boy thought about it, and asked:
"Grandfather, which wolf wins?"
The old man quietly replied:
"The one you feed."

Clarity provided this video in a comment on Smoking Mirrors. A lot of it rings true to me as well.

Posted by Jody Paulson at 9:30 AM No comments: