Who do the rich want you to vote for?

Here's the number of $4600 contributors from opensecrets.org: 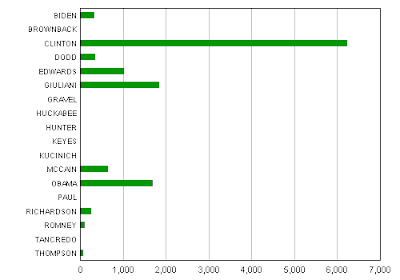 Posted by Jody Paulson at 11:41 AM No comments:

Checking in from Christmas vacation ...

I'm in Fort Wayne visiting family for the holidays, and it looks like I'll have even less time to blog than normal, but I just wanted to say a few words.

First off, let me repeat my warning to hedge against a falling dollar. Don't delay, get off your butt and buy durable goods, food, and prepare for a severe gas shortage today!

Second, I want to comment on a blurb I saw on CNN -- "How much for the Magna Carta?"
Answer: OUR RIGHTS ARE NOT FOR SALE.

Lastly, since the title of this blog is "What They Don't Tell You," here's something you probably haven't heard on the mainstream news:

Descendants of Sitting Bull, Crazy Horse break away from US
http://www.nysun.com/article/67680

FREEDOM!
http://www.lakotafreedom.com/
Posted by Jody Paulson at 10:36 AM No comments:

I don't have much time to write about this, but appearantly a lot of great things happened yesterday. Ron Paul's campaign brought in a record amount of money (he's not my first choice for president but it's an outrage how hard the media has been working to marginalize people like him and Kucinich). They held Tea Parties in Boston, DC, LA, Cincinnati, Portland, Milwaukee, and San Francisco (which I attended). Here we are throwing the flawed 9-11 Commissions Report into the bay: 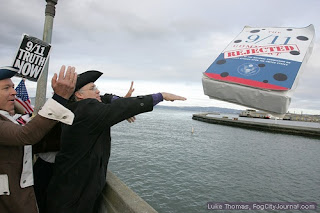 (Don't worry, we didn't litter ... some hearty soul in a wetsuit fished it out later :)
Posted by Jody Paulson at 10:46 AM No comments:

DID YOU EVER HEAR TAPS by Carly Sheehan

Carly Sheehan, Cindy Sheehan's daughter, read this poem at Cindy's open house at her congressional campaign office in San Francisco. I was there and there wasn't a dry eye in the house.

Support Cindy Sheehan for congress in '08!
Posted by Jody Paulson at 12:46 PM No comments:

I was there for the first part of this video. Dylan, the guy who took the video, is actually one of the guys who made the now famous 9-11 movie, Loose Change. He's here for the premier of "The Final Cut" in San Francisco this Dec. 15 at 7pm at the Victoria Theater (2961 16th Street). Very funny video!
http://911blogger.com/node/12956
Posted by Jody Paulson at 10:10 AM No comments:

Things have been hopping in San Francisco

Yesterday there was an emergency action in front of House Speaker Nancy Pelosi's office by Code Pink and others in response to the disgusting revelation that she was given a "virtual tour" of torture methods (including waterboarding) as early as 2002. http://www.indybay.org/newsitems/2007/12/11/18466212.php

The day before there was a Code Pink bridge walk over the Golden Gate Bridge (as there is every second Sunday in San Francisco -- gather at 12 noon at either side of the bridge, wear pink and bring a sign that doesn't have a stick in it).

Cindy Sheehan had a wonderful open house at her campaign headquarters on Saturday (she's running against Pelosi in '08).
http://www.indybay.org/newsitems/2007/12/09/18465925.php
Posted by Jody Paulson at 9:27 AM No comments:

"The definition of insanity is doing the same thing over and over and expecting different results." -- Ben Franklin

"When the president decides something on Monday, he still believes it on Wednesday -- no matter what happened Tuesday." --Stephen Colbert

I was listening to Mike Malloy's poetically articulate harangues on the radio the other day, and I kind of had an epiphany (listening to Malloy tends to do that). He argued that Bush had to be insane -- how else could you say that your belligerent Iran policy hasn't changed when the NIE report definitively says they stopped their nuclear weapons program in 2003?

And of course, he's right. No sane person would do that. And this country is just as crazy as he is if we let him get away with it.

What defines this presidency, his administration, and my congressional representive (who just happens to be speaker of the house)? A total lack of responsiblitity. And by responsibility I mean just that, the ability to respond. Whether or not you attribute it to incompetence, corruption, or pure evil -- you have to admit when two planes hit the twin towers and you just sit there reading about goats, when a hurricane wipes out a major American city and you go have birthday cake with John McCain, when you refuse to listen to intelligence reports, military experts and the general public and push on with a quagmire that had no justification in the first place, it shows a definite lack of ability to respond.

Nancy Pelosi acts like she could care less about what her constituents think -- in the 2006 election, 60% of San Franciscans voted for it to be city policy to call for the impeachment of Bush and Cheney. You have to wonder what the percentage would be now, especially for Cheney alone. Now new revelations have shown that as early as 2002 Pelosi "... was given a virtual tour of the CIA's overseas detention sites and the harsh techniques interrogators had devised to try to make their prisoners talk...." including waterboarding [ http://seattletimes.nwsource.com/html/politics/2004061384_tapes09.html ]. Yet Pelosi said nothing, and she still insists that "impeachment is off the table." She hasn't held a public town-hall meeting since January 2006. That's not responsive government!

If you stop and think about it, our whole nation has reverted into a mass of irresponsible clods, accountable to neither themselves, other countries, or planet Earth herself. That's the definition of insanity, my friends.

How do we take back our sanity? First by acknowledging our own responsibiliy, to ourselves and others (and I'm including myself here!). Sanity begins by holding ourselves accountable, and changing our behavior when we finally accept the truth.
Posted by Jody Paulson at 1:48 PM No comments:

I haven't had a chance to read Naomi Klein's book yet, but from the looks of this video, I'd say the entire country ought to get their hands on a copy.

Posted by Jody Paulson at 5:22 PM No comments:

Things that make sense to me

I've been collecting a few quotes to post here, I think I lost one but here are the others:

"Fear is just another word for ignorance." -- Hunter S. Thompson

"I wouldn't go to war again as I have done to protect some lousy investment of the bankers. There are only two things we should fight for. One is the defense of our homes and the other is the Bill of Rights. War for any other reason is simply a racket." -- Major General Smedley Butler USMC

I was sick about a week ago and I used that for an excuse to go on another cleansing fast. I highly recommend fasting as a way to induce clarity and get rid of the poisonous waste that permeates our general piggish lifestyle as Americans. This post kind of speaks to that:
What We Truly Seek
"America must do what it fears most to do - contract; a direction opposite to its self image of limitless expansion, its belief in a Divine national preference."
http://vpdonhynes.blogspot.com/2007_12_02_archive.html
Posted by Jody Paulson at 9:20 AM No comments:

Posted by Jody Paulson at 12:42 PM No comments: