Here are some videos from the Code Pink actions:

As scheduled, Camp Pelosi shut down today and all the Code Pinkers got together at brunch and broke their fast, including myself. I didn't really want to, and I have mixed feelings about leaving camp, but people can only do so much and we all need to recognize our limitations. Keeping up one's health and energy are important in the scheme of things, too. At the table I heard about a site that has some excellent pictures of Thursday's action: http://www.fogcityjournal.com/news_in_brief/lt_code_pink_pelosi_070824.shtml
Posted by Jody Paulson at 2:02 PM No comments: 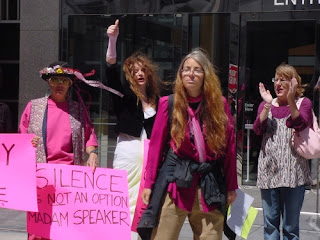 My elected representative won't have a public dialogue with her constituents about peace, and Code Pink wants to know why.

Nancy Pelosi, Speaker of the House and congressional representative of my district in San Francisco, hasn't held a public meeting with her constituents about anything since Jan. 2006 -- months before she became Speaker. One could easily argue she would still be Minority Leader were it not for the dedicated work of peace activists all over the country to get Democrats elected in November ... yet Pelosi's aid has told us she has no room on her agenda this recess to publicly dialogue with any of her constituents about peace.

For this reason, I and perhaps five other people are on their 12th day on a hunger fast. As far as I know, all of us have been been taking juices and broth as well, and no one has had any serious health concerns so far. Four of us fasters were arrested in the action in front of the old Federal Building (Pelosi's local office) yesterday, along with another girl. We blocked the building with perhaps 10 other protesters, wearing pink duct tape over our mouths to symbolize our voices being silenced when it comes to peace. Has our government become so privatized the public can't expect to have a dialogue with their elected representatives anymore? Isn't the Iraq war the number one issue in our country today? Yet Pelosi has no room on her agenda for peace. And according to her, impeachment is off the table. As one of my fellow protesters said, when you take impeachment off the table, you take the Constitution off the table. This should have been much more widely covered story than appearently it was. If only I had more time to document it!

I have limited time to work with the computer these days, but here are some links to posts about our event yesterday:

The day after those pictures were taken, Senator Feinstein surprised us by actually coming out and meeting with us. I and about 4 other campers spoke to her for about 20 minutes. She was very cordial and urged us not to continue our fast for the sake of our health, but she didn't really say anything new when I asked her why she voted for the spending bill for the "surge" in Iraq. It seemed to be a very polished and tired answer about how there wouldn't have been enough votes for cloture and we needed to fund our troops while they were there, but at least she promised to give us a formal, one hour meeting sometime after late September. We decided to leave her house early and concentrate our efforts on Camp Pelosi.

I haven't been back there since last night, but as far as I know we still have a tent pitched in the street by Madam Speaker's house. I went to knock on her door last night to ask her when she thought she *would* have a meeting with the public, but a man I presume was her husband opened the door and told me I was trespassing before I got to the front steps. Check out http://pelosiwatch.org/article.php?list=type&type=195 .

Also check out my earlier blog posts on this subject at http://jpaulson.blogspot.com/ .
Posted by Jody Paulson at 12:29 PM 1 comment:

Speaker Pelosi was returning home, escorted by Capitol Police, and was met by around four campers representing Code Pink. Ms. Blome greeted her with a flower-covered peace sign and asked, "Nancy, why won't you meet with us?"

Speaker Pelosi replied, "I will NEVER meet with you. Get away from my house."

Then Ms. Blome, who emanates quiet, principled integrity, said something like, "but what about the Iraqi people's homes that we invade every day?"

"Get away from my house, you NUT!" Pelosi spat back, as she went inside.

As you know from my previous post, I've been fasting and (mostly) camping out with Code Pink over the last week. We were at Senator Dianne Feinstein's house to protest her vote towards funding the "surge" in the Iraq occupation, and for the last three days or so we've been in front of Speaker of the House Nancy Pelosi's house to try to get her to meet with us. I went with a group of about 15 peace activists (from various organizations, including the Quakers and Code Pink) on Thursday to try to set up a meeting with Representative Pelosi. We were shuttled off to a private meeting room on a different floor and essentially stonewalled by one of her aids. Though August recess is the time when representatives traditionally meet with their constituency and Pelosi hasn't held a public meeting since long before she became speaker of the house, we were told was that there was no room on Nancy's schedule for peace. That struck me as rather odd, since I doubt she would be Speaker of the House if it were not for America's desire for that very thing.

I'll admit I haven't been active with Code Pink for that long, but from what I understand we have been asking for a meeting with Speaker Pelosi for 8 months and 5 months ago we were promised a meeting within 3 months that never materialized. So the very next day Medea Benjamin, Toby Blome, a lady named Nancy and I (representing Code Pink) came back to, once again, politely ask for meeting. We were given a timed minute with the same aid (a guy named Dan) and pretty much given the brush-off. We ended up unfurling a banner and walking up and down the halls singing (to the tune of "Row, row, row your boat"):

Nancy, Nancy, you're our Rep
It's time to end the war!
Meet, meet, meet with us,
That's all were asking for!

We're moving back to Senator Feinstein's house today, so if you're in the area, please stop by and show us your support!
Posted by Jody Paulson at 12:08 PM No comments:

I don't have much time to write a lot today ... let me just say that I've spent the last few days sleeping in a sleeping bag in front of one of the most gorgeous homes in San Francisco -- Senator Feinstein's house. It's up a huge flight of stairs, though, and seeing that I haven't been eating anything during that time, it's been a pain in the rear to go anywhere. The first night we had around 16 people stay overnight, but lately that number has dropped to around five. I'd like to see this movement build and if anyone lives close to here please, show up to Camp Pelosi and at least show your support. We really appreciate it.

Essentially, we want Feinstein to stop funding the illegal occupation in Iraq. I'm also pretty mad at her for voting for the increased powers to wiretap American citizens, but to be fair I am glad she called for the closure of Guantanamo Bay Prison recently.

Today Code Pink moved their camp/hunger strike to Speaker Nancy Pelosi's house, because Nancy has refused to hold a town meeting that we have been requesting for months -- we want her to put impeachment on the table and (as for me personally) I'm pretty upset that she allowed the money for the "surge" in Iraq to come up for a vote, as well as the vote for increased powers to wiretap Americans, even though she voted against those measures.

Here's an excellent article on our Sunday walk over the Golden Gate Bridge (about 100 very colorful participants showed up): http://www.sfgate.com/cgi-bin/article.cgi?f=/c/a/2007/08/13/BACARHF0R.DTL&tsp=1

Camp Feinstein: Lyon and Vellejo street (go up the stairs to the big garden with the heart in it)

Camp Pelosi: Corner of Broadway and Normandie (Normandie is by Divisadero)
Posted by Jody Paulson at 5:07 PM No comments:

I tried to get to the press conference, but I misjudged how much time it would take to get there and had a hard time finding the place. But I was fortunate enough to actually sit at Cindy's table when she met with supporters last night and meet her in person. She struck me as a remarkably approachable, warm, and politically savvy person. I think she can beat Pelosi, and I'm not the only person who thinks so: check out Justin Raimondo (former Republican candidate for that seat) at http://antiwar.com/justin/?articleid=11269

Also read:
The political meaning of the conflict between Cindy Sheehan and the Democratic Party
http://portland.indymedia.org/en/2007/07/362755.shtml

"I don't have the power to destroy the Democratic Party as some people have written. The Dems themselves are doing a good job of that and if they don't wake up and distance themselves from George faster than the Republicans are, and if they don't realize that people are more important than politics, they will go the way of the Whigs, and sometimes endings are as appropriate and constructive as beginnings." -- Cindy Sheehan
Posted by Jody Paulson at 5:42 PM No comments:

Note to people who read my posts on PDX Indy

I don't know who's new over there volunteering to edit posts, but lately my comments are getting the hatchet job. I can understand editing news reports for brevity, but changing someone's *comment* by deleting sentences and links? I think that's pretty lame, and it's happened several times of late ...
Posted by Jody Paulson at 11:50 AM No comments: