What does this mean to you?

Posted by Jody Paulson at 4:39 PM No comments:

Agribusiness doesn't want you raising your own food.

Learn more about legislation in the works to make it cost-prohibitive to raise your own livestock: I'll Give Up My Chicken When They Pry It From My Cold Dead Hands

How about your right to a backyard garden?

There's something almost surreally evil about huge corporations steering government legislation to make it legal for them to patent life, tinker with our food by splicing its genes (and not telling us), but trying to make it illegal or unfeasible to raise our own food!
Posted by Jody Paulson at 12:56 PM No comments:

Videos for the New World Order

If this International Swine Flu Conference sounds scary to you:

Remember, you have a choice.

When you consider that Blackwater was also hired by the government to help "re-establish order" after hurricane Katrina, that information is more than a little chilling, isn't it?
Posted by Jody Paulson at 10:30 AM No comments:

I ran across this video quite by accident. This woman seems very calm, reasonable and highly knowledgeable about her subject, and from what I witnessed of the crazy scare-mongering last spring ... I can't help wondering, "what if this is true?"

Anyway, she presents a bizarre and frightening scenario regarding the "swine flu pandemic" and how it might be used to detain those who refuse to be vaccinated in one of the newly commissioned FEMA camps.

Update: it turns out that Rima E. Laibow is a psychologist who just happens to be married to General Albert Stubblebine, former head of the US Army Intelligence & Security Command (INSCOM) 1981-84. So let that information color what she says in this video! <:(
Posted by Jody Paulson at 3:36 PM No comments:

What do Willie Nelson, Rosie O'Donnell and Charlie Sheen have in common?

They all question the official story of what happened on 9-11.

Here are some people who agree with them: http://patriotsquestion911.com/

Support the NY City ballot measure to have a real investigation of 9-11 with subpoena power:
http://nyccan.org/

Learn the truth. The 9-11 commission was a whitewash and a sham, that didn't even cover why WTC 7, a 47-story building that was never hit by a plane, collapsed in its own footprint at near-free fall speed hours after the twin towers did the same thing. 9-11 took thousands of American lives and provided the justification for two destructive invasions. Rescue and recovery workers are still dying from inhaling the toxic dust they were never warned about by the EPA. Our country will not heal until its citizens are prepared to demand and act on the truth.
Posted by Jody Paulson at 8:53 AM No comments:

Military to help with Swine Flu Innoculations this fall?!

That's what Fox News is saying, apparently. Say, what ever happened to Posse Comitatus (an act that says the military remain separate from domestic law enforcement)? Oh yeah, I guess that went out with most of our Bill of Rights and Habeus Corpus after 9-11 scared Americans so much they willingly handed over all the freedoms their ancestors risked their lives for.

What is going on here? Doesn't anyone remember the fiasco of the 1976 Swine Flu vaccinations, where hundreds died and thousands were paralyzed after being vaccinated? (Only one person died from Swine Flu itself).

Another thing that makes me suspicious is that Fox News is saying that the people most at risk from the H1N1 virus happen to be military-aged people. You know, the people who might fight back in case of martial law and the overturning of our constitution.

What else might the military be injecting into people? You know, they can inject computer chips in people these days. Does anyone recall the Book of Revelations, 13:16-18? Please, have some sense of perspective before you rush to get vaccinated.
Posted by Jody Paulson at 10:35 AM No comments:

I want to see 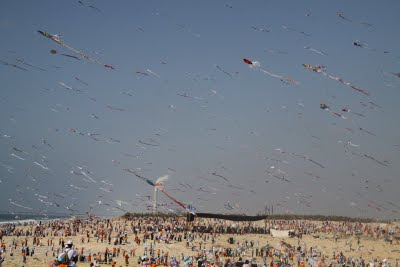 ... kites flying in the air over Gaza, not missiles and bombs.

My oldest son is 11. When I see stories like this, I don't know whether to cry out in anger or grief, but the tears flow freely regardless, and I'm in a public place. Societies are judged by how they treat their most vulnerable, and how they treat the dead.

Let us pray for a future with a lot more kites.
Posted by Jody Paulson at 1:11 PM No comments: