Posted by Jody Paulson at 9:45 AM No comments:

It goes without saying we are being lied to about what was likely a drill, filled with crisis actors, designed to test how Americans would react to martial law, among other things. In related news, regarding the FBI's possible murder of the unarmed "friend" of Tamerlan Tsarnaev, Ibragim Todashev:
FBI agent cleared in Florida shooting of suspect questioned about Boston bombing

Subway Riders Get to See Video of Building 7’s Collapse 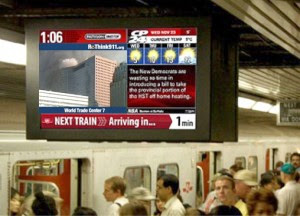 On March 18, 2014 the ReThink911 campaign launched its newest wave of ads in the Toronto subway system. For two weeks, 1.2 million Toronto residents will see the video of Building 7’s collapse and be directed to ReThink911.org to learn more. According to Pattison Outdoor, daily subway riders will see the ad an average of five times during the two-week period.

Toronto-Subway-ScreenThe ad blitz coincides with Richard Gage’s 3-week Canadian speaking tour, which brings him to Toronto on March 20 at Toronto University’s Innis Town Hall. To learn more and purchase tickets to an event in your city, visit ReThink911.ca.


Posted by Jody Paulson at 2:37 PM No comments:

Why do we work so hard? (satire)

Here's the original commercial for Cadillac:

Posted by Jody Paulson at 8:10 AM No comments:

Things are getting so dumb I don't know what to say ...

There was yet another winter storm in Ft. Wayne a couple days ago and I was stuck in my room and almost the only thing they talked about on the mainstream news was that stupid "disappearing" Malaysian Airlines Flight 370. I can honestly say I haven't watched a minute of it because the idea that a jet plane can just up and disappear in an age when spy satellites can track people's cars from outer space in real time ... I mean that's just ridiculous. I can go on Google Earth and focus in on jet planes at any major airport on the planet, and you're telling me no one knows what happened to Flight 370? Really??? So I just ignored it but the mainstream media is really pushing this story. And I'm thinking, wow, they must really need the distraction or something, I can't believe they are insulting our intelligence with this crap ...

Anyway, here are some alternative news stories that I've been reading ...
Media Focuses In On Flight 370 Conspiracy Theories While World Edges Closer To War

Say a prayer for tomorrow.

[The Illuminati (or whoever they are) seem to have their favorite dates for mayhem and destruction, and March 11th might be one of them. The Madrid train bombings happened 10 years ago on that date, and 3 years ago we had that huge earthquake(?) that started the Fukushima mess in Japan. These days we have a whole new bout of threats, including NATO and Russia's flirtation with a new cold(?) war. The following is a comment from Daisy dated today that I got from Max Malone's website]


"I’m no Putin fan, but Russia did not invade the Crimea!!! They were already there, Russland and Crimea have a military agreement. Especially unwelcome is the fact that the so-called ‘invasion force’ has been there for 15 years already.
So here they are, the facts:
1) A Russian naval presence in Crimea dates to 1783 when the port city of Sevastopol was founded by Russian Prince Grigory Potemkin. Crimea was part of Russia until Nikita Khruschev gave it to Ukraine in 1954.
2) In 1997, amid the wreckage of the USSR, Russia & Ukraine signed a Partition Treaty determining the fate of the military bases and vessels in Crimea. The deal sparked widespread officer ‘defections’ to Russia and was ratified by the Russian & Ukrainian parliaments in 1999. Russia received 81.7 percent of the fleet’s ships after paying the Ukrainian government US$526.5 million.
3) The deal allowed the Russian Black Sea Fleet to stay in Crimea until 2017. This was extended by another 25 years to 2042 with a 5-year extension option in 2010.
4) Moscow annually writes off $97.75 million of Kiev’s debt for the right to use Ukrainian waters and radio frequencies, and to compensate for the Black Sea Fleet’s environmental impact.
5) The Russian navy is allowed up to
- 25,000 troops,
- 24 artillery systems with a caliber smaller than 100 mm,
- 132 armored vehicles, and
- 22 military planes, on Crimean territory.
6) Five Russian naval units are stationed in the port city of Sevastopol, in compliance with the treaty:
- The 30th Surface Ship Division formed by the 11th Antisubmarine Ship Brigade. Comprises the Black Sea Fleet’s flagship guard missile cruiser Moskva as well as Kerch, Ochakov, Smetlivy, Ladny, and Pytlivy vessels, and the 197th Landing Ship Brigade, consisting of seven large amphibious vessels;
- The 41st Missile Boat Brigade includes the 166th Fast Attack Craft Division, consisting of Bora and Samum hovercrafts as well as small missile ships Mirazh and Shtil, and 295th missile Boat Division;
- The 247th Separate Submarine Division, consisting of two diesel submarines – B-871 Alrosa and B-380 Svyatoy Knyaz Georgy;
- The 68th Harbor Defense Ship Brigade formed by 4 vessels of the 400th Antisubmarine Ship Battalion and 418 Mine Hunting Ship Division respectively.;
- The 422nd Separate Hydrographic Ship Division boasts the Cheleken, Stvor, Donuzlav and GS-402 survey vessels and hydrographic boats.
7) Russia has two airbases in Crimea, in Kacha and Gvardeysky.
8) Russian coastal forces in Ukraine consist of the 1096th Separate Anti-Aircraft Missile Regiment in Sevastopol and the 810th Marine Brigade, which hosts around 2,000 marines.
9) Russian naval units are permitted to implement security measures at their permanent post as well as during re-deployments in cooperation with Ukrainian forces, in accordance with Russia’s armed forces procedures.
Authorities in the Ukrainian Autonomous Republic of Crimea – where over half the population is Russian – requested Moscow’s assistance after the self-proclaimed government in Kiev introduced a law abolishing the use of languages other than Ukrainian in official circumstances.
Last week, Russia’s Federation Council unanimously approved President Vladimir Putin’s request to send the country’s military forces to Ukraine to ensure peace and order in the region 'until the socio-political situation in the country is stabilized.'
However, the final say about deploying troops lies with Putin, who hasn’t yet made such a decision, stressing that deploying military force would be a last resort.

"The USA (Obama) & NATO are sending troops!
The United States will bolster military cooperation with Poland and Baltic states, the mostly symbolic steps to expand aviation training in Poland and step up the US role in NATO’s air patrols over Baltic countries.
There are four US F-15 fighter jets currently flying the air patrols and the Pentagon will send six additional F-15s and one KC-135 aerial refueling tanker to the mission, said a defense official, who spoke on condition of anonymity.

"Forget the Gas or Oil, this is about pur power. Russia & China are the only ones that trade Oil & Gas in Rubel or Remnibi, and not in Petrodollars! Bad Idea…

"Beware the 'Truthloaders' they are gatekeepers! Don’t forget the war already started, the war is already being fought in your head!"

Posted by Jody Paulson at 8:11 AM No comments:

At least one of Fort Wayne, Indiana's news stations has declared this to be the city's toughest winter ever, and I'm not going to argue with that because I'm not from really from here, but I can tell you that it was bad enough for me to stay in my crummy hotel room with nothing but crappy cable shows to keep me company for weeks.  There's not a lot I can say about "what they don't tell you" because I've been privy to nothing but some obviously vile propaganda from the usual suspects.

From my estimation, it's obvious why Putin "invaded" the Crimea ... just look at a map.  It's essential for the Russian Navy to be able to control that piece of land, and it's pretty obvious to me that the West fired the first shot in this deadly game of chicken by instigating a largely fascist-led coup in the Ukraine.  I'm no expert on this subject, though, and I really ought to do some on-line research before I offer my opinion over the net.  Rest assured, though, things aren't as they appear.

Anyway, I'm going to post something now just in case I don't get around to it later in the day, I have a lot of catching up to do as far as learning about what's going on in the world.  Basically I just want my family and friends to know I'm okay.