Posted by Jody Paulson at 11:37 AM No comments:

A date with Dr. Frank-N-Furter 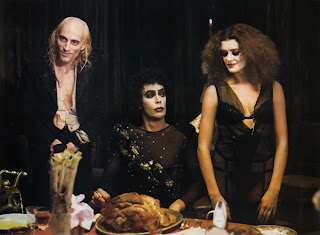 How'd you like to go out with this guy?

"-- and my lovely companion will have the cloned baron of beef ..."

"Uh, no I won't ..." you protest to the waiter, while out of the corner of your eye you catch your dinner partner slipping lithium in your water glass.

Would you get up and walk out? I should hope so! But guess what?

Should we drug the drinking water? Adding lithium to the taps 'could lower suicide rates'

I'm not sure how much you can trust the Daily Mail, but seeing as we're eating genetically modified food and drinking fluoride enhanced water right now, these stories don't seem that unbelievable ...
Posted by Jody Paulson at 2:38 PM No comments:

Posted by Jody Paulson at 10:36 AM No comments:

Why I believed the "official story" about 9-11

Believe it or not, I didn't always think 9-11 was an inside job ... there was about a month back in 2001 where I went along with what the mainstream media was telling us. It's been a long time, but since I'd like currently unaware people to start questioning their misguided trust in the official story, it's important for me to ask myself why ... why did I believe back then what so many still believe today?

It's not that I didn't think the Bush Administration wasn't evil enough to murder hundreds of innocent Americans ... though I can understand why other Americans would think this way. I knew that Bush had stolen the 2000 election, and someone that ruthless against the principles of democracy probably wouldn't blink at killing hundreds of Americans. But now we have proof of how ruthless and uncaring these people are: they lied us into a war that ended up killing and maiming thousands of Americans and hundreds of thousands of Iraqis. But it would have taken the collusion of (at the very least) scores of people to pull off an inside job, or even a "let it happen on purpose" scenario the scope of what took place that September. Is it possible for that many people to keep such a horrible secret from the public? Yes, according to the man who disclosed the "Pentagon Papers," Daniel Ellsberg: http://www.washingtonsblog.com/2011/05/daniel-ellsberg-secrets-can-be-kept.html

But I didn't know that. Early on, I read some papers on Indymedia from people who knew their physics and how buildings were constructed, and said, "there's no way those buildings could have fallen like that. Jet fuel doesn't melt steel. Buildings, if they're going to fall, topple over, they don't disintegrate (at free-fall speed!) into their own footprint, unless it's a well planned, controlled demolition. Today 1,501 verified architectural and engineering professionals agree with that assessment: http://ae911truth.org

How could they plant all those bombs in secret?

Okay ... I thought. How the hell did they rig up those buildings for a controlled demolition without everyone else in the building knowing about it??? Again, GW at Washington's blog has the answer: http://georgewashington2.blogspot.com/2011/05/no-it-wouldnt-have-been-impossible-to.html

Those were my major misgivings. It turns out that it is possible for hundreds of insiders to keep a secret ... this was done during the Manhattan Project, responsible for killing thousands that probably didn't have to die, and unleashing one of the most terrible weapons this Earth has ever known. How many terrible weapons does the acknowledged "Shadow Government" of this country have access to, that most people don't know about? (Hint: look up "HAARP" on your internet browser.)

Despite these hesitations, I realized the "official conspiracy theory" (that 19 guys with boxcutters who trained on Cessnas were capable of knocking down three of the largest skyscrapers in the world and hitting the Pentagon) was even more unlikely, so I kept researching -- and was soon overwhelmed with so much evidence pointing towards an "inside job" scenario I could not in good conscience believe the official story. There are so many inside stock deals, unbelievable gaffes in protocol (in which the offenders weren't punished but promoted) and impossibly convenient coinciences ... anyone in their right mind who looks into this story has to ask ... "why haven't we properly investigated these things? This deserves not only a second look, but a serious government investigation!"

World Trade Center 7 is a 47-story building that was never hit by a plane. It completely collapsed the afternoon of 9/11/01, allegedly due to fire. Many family members of 9-11 victims think there's more to the story. You can contribute to the cause of their informing the public about this anomaly here: http://rememberbuilding7.org

To learn more about the strange events of 9-11, watch this movie (and get your friends to watch it too!): Loose Change (final cut) http://lc911finalcut.com
Posted by Jody Paulson at 11:18 AM No comments:

Posted by Jody Paulson at 11:44 AM No comments:

The Corruption of the Law

This is about the best explanation you're ever going to see:

Politics is the art of telling people what they want to hear and then doing what’s expedient, according to the dictates of power and money. It’s basically the art of the deal. Deals are accomplished through compromise. It’s quid pro quo. It’s been said that ‘the devil is in the details’ and that is what deals contain, details. Details require lawyers. The job of a lawyer is to find the loopholes and exceptions to the law, so that the law can be bent to accommodate the needs of the deal. Eventually, the law no longer operates according to its tenets and the only place it applies is to the living conditions of those too poor to afford lawyers, at the whim of those who can. -- Les Visible

Source: The Base of the Mountain and the Wheel of Fire.
Posted by Jody Paulson at 7:42 AM No comments:

"1984 / They Live" Double Feature Coming to a Theatre Near You

You knew it was just a matter of time. Here's the latest disturbing piece from Washington's Blog: Drones Becoming Pervasive INSIDE America 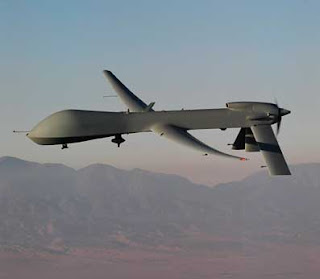 Posted by Jody Paulson at 8:14 AM No comments:

"and then we'll see if he thinks it's torture or not!"

Visit msnbc.com for breaking news, world news, and news about the economy

I couldn't have said it any better myself.
Posted by Jody Paulson at 11:04 AM 1 comment:

Cindy Sheehan: "If You Believe The Newest Death Of Osama Bin Laden YOU'RE STUPID!"

He makes some very good points. One has to wonder ... why is the government wrecking its own story by totally changing it within 48 hours? I speculate someone's got it out for Obama and this whole operation is being deliberately sabotaged.
Posted by Jody Paulson at 9:36 AM No comments:

"It's Orwell meets Woody Allen at the slab in Rocky Horror. It's Kennedy's head going back and to the left on an 8mm loop over and over again. It's the waking moment between a nightmare and a worse everyday consciousness." -- Mouser comment at http://kennysideshow.blogspot.com/2011/05/top-secret.html

The top "leaked" photo only lasted a few hours before it was discovered to be a photo shopped frame from Blackhawk Down. 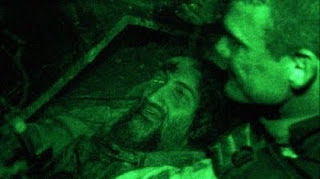 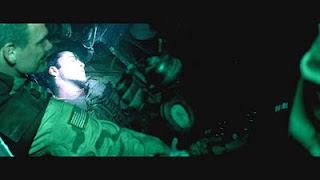 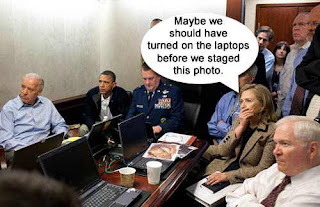 The Truth Will Not Stay Buried.

Just as Bush ludicrously declared "Mission Accomplished" on May 1st, 2003, Obama's declaration that "Justice Has Been Done" on May 1st, 2011 couldn't be farther from the truth.

The truth was given a burial at sea in hopes that no one will ever find it. The guy who wrote this article makes a good point: when Obama said (during the presidential debates), "We will track down Osama bin Laden and kill him," he was showing his contempt for our Constitution "which vehemently protects the accused until he is proven guilty in a court of law." Not only that, he was showing his contempt for the truth. After all, dead men can't contradict the official story of what happened on 9/11, can they?

I am thoroughly disgusted at the stories the media has been perpetuating about the obvious lie that Osama was just recently killed in Pakistan. They are seeking to justify the use of torture by saying "enhanced interrogations" were key to discovering his whereabouts. This is a lie. The only thing torture is good for is getting a guy to say what you want him to say, not for getting him to tell you the truth.

Well guess what, my friend? Truth floats. You might think you have it buried but you can never truly forget about it. Intrinsic to its nature is the quality of rising above whatever is holding it down. It's indestructible and will ultimately outlast you. Ugly as it may seem to you, that body will surface again for all to see.
Posted by Jody Paulson at 9:45 AM No comments:

Osama "officially" dead. Can we get out of Afghanistan now?

Actually, Osama's bin dead a while now. Another assassinated leader, Benazir Bhutto, said as much: http://www.youtube.com/watch?v=4TeYyHt3JZ4

How convenient that the guy was buried at sea and the compound he was living in was burned to the ground. How's that for evidence?

What, you think that photo of the dead Osama was evidence he was shot in the eye (it was the left eye, you know ... that has occult significance ...)? Check this out: 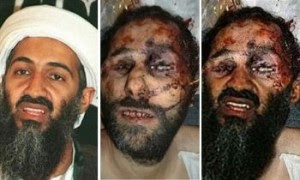 You know what else is pretty convenient? The timing. What a coincidence -- Saif al-Arab Qaddafi and Colonel Qaddafi's baby grandkids were blown away the very same day. But this clear assassination attempt (much more controversial that the assassination of bin Laden) is overshadowed with the obviously righteous bagging of a hated terrorist. So let's not question the wisdom of going around assassinating whatever foreign leader we find inconvenient.

Can we get out of Afghanistan now?

UPDATE:
Speaking of "occult significance," I had also considered it probably more than a coincidence yesterday was the anniversary of George W. Bush's infamous "Mission Accomplished" speech. Guess what? It's also the anniversary of the founding of the Illuminati. More about Beltane and its traditional link with human sacrifice here: http://vigilantcitizen.com/vigilantreport/binladen-mayfirst/
Posted by Jody Paulson at 9:37 AM No comments: