Mike Rivero comments: "Why on Earth would Al-Shabaab release the names of the attackers? Did 'Al Qaeda' release the names of the 9-11 hijackers? More and more this is feeling like a propaganda "prequel" to a major false-flag attack here in the US, in FEMA Region III, the first of October." It was also noted on his site that "A quick check in local Somalian communities found that no one knew the Kansas City name on either side of the state line. Said Abdullahi Kerow, who runs the Somali Bantu Foundation in Kansas City, Kan.: 'I know all of the families in Kansas City, Kan., and that name is not one of our families.'"

Earlier I saw a sequence of high-quality photos of the attack, looking suspiciously like they were staged. As Max Malone notes on the following video, I couldn't help but notice the fact that a cameraman taking this photo would have drawn attention to the "woman hiding for her life," yet neither her or her children seem to notice. Pretty weird. 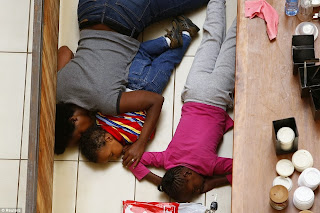 Jody - you were right about this one. Have been going over the photos since last night. Definitely there are phony photos / scenes and acting in the media reports. Take care. Cx

Twitter censors free speech. Try Gab.com. My handle there is @GreenTaraSmile. If you want to see my old stuff on Twitter, check out @jodypaulson and @greentaralady.